JavaFX running in kiosk mode on the Raspberry Pi

The Raspberry Pi in combination with an inexpensive touch screen, makes a perfect controller for a machine or game console. Let’s see how we can use Java and JavaFX to build a test application which also communicates with the pins of the Raspberry Pi to control a LED. We have done something before already in the post “Light Up your Christmas Tree with Java and Raspberry Pi”, so what’s new?

Download the Raspberry Pi Imager tool and burn the “Raspberry Pi OS (32-bit)” (with Desktop) to an SD card. When finished, put it in your Raspberry Pi, start the board, and follow the steps to configure Wifi, language… to fit your needs. 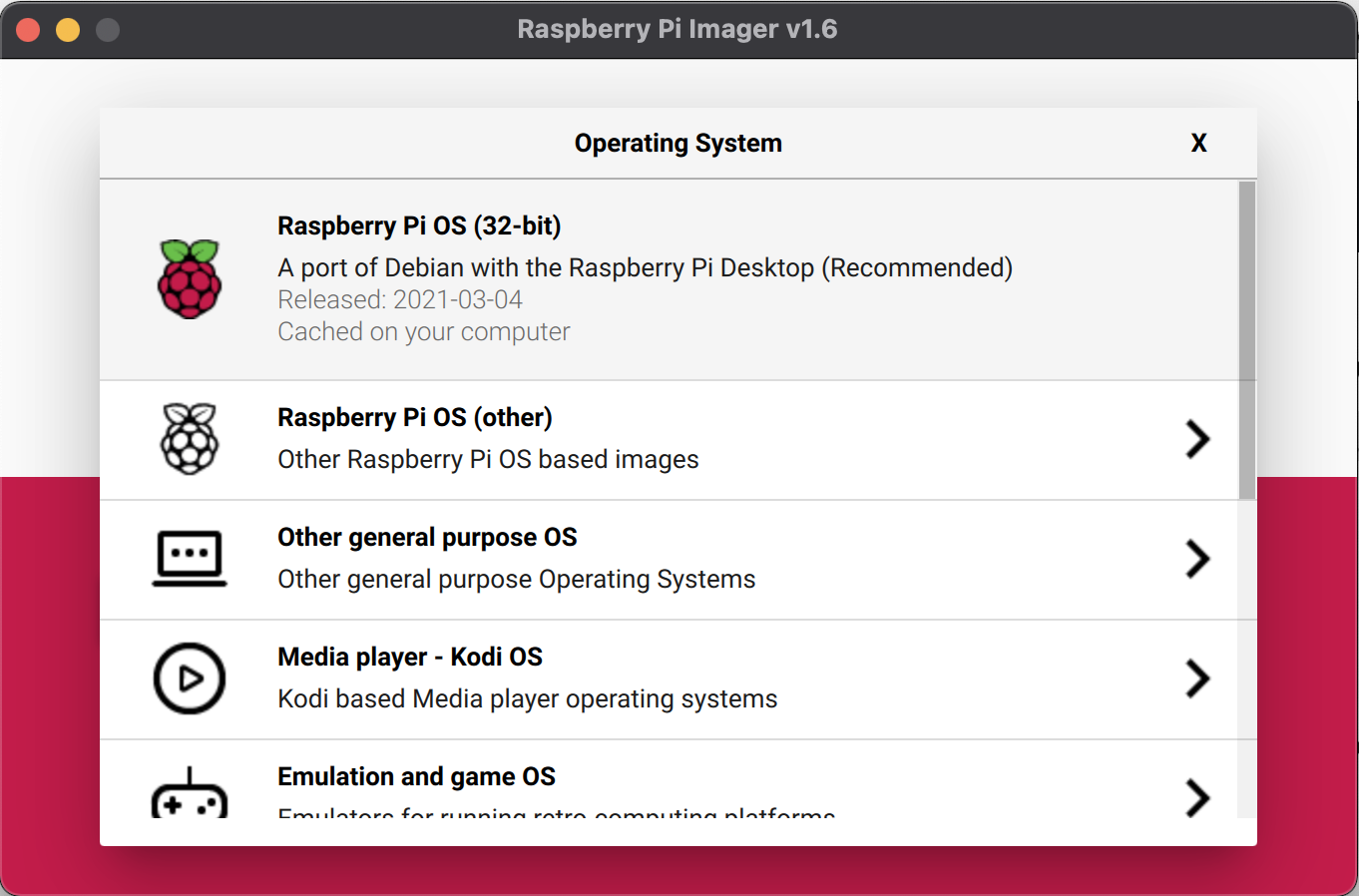 Remark: in the Imager tool you can also select “Raspberry Pi OS (Other)” > “Raspberry Pi OS Full (32-bit)” which includes extra software and has Java 11 pre-installed. If you only need Java, you can select this version. The steps below will provide additional other tools which are not included in any of the Raspberry Pi OS versions.

For this demo, we will use Maven to build and run the project on the Raspberry Pi itself. Of course, you can build on your development PC, but using the Raspberry Pi as a programming computer works really well. It’s not as fast as a “full-blown” PC, but a perfect solution for some quick testing, or when you are in need of a very cheap computer.

If you want to take the approach I’ve used to build and run on the Raspberry Pi, you need to install:

You can manually install all of these, or follow the following steps to run this automatically with Ansible.

Remark: this Ansible project can also be used to install the tools from a PC. See the README in the GitHub project for more info.

Get the example project

The Pi4J project and website provide multiple example projects. Let’s use the “minimal JavaFX example”. This application is fully documented on the Pi4J website > “Getting Started” > “User interface with JavaFX”. We can get the sources from GitHub and build it with Maven.

When the build is finished, we will find all the required files to run the application in “/home/pi/pi4j-example-javafx/target/distribution”. 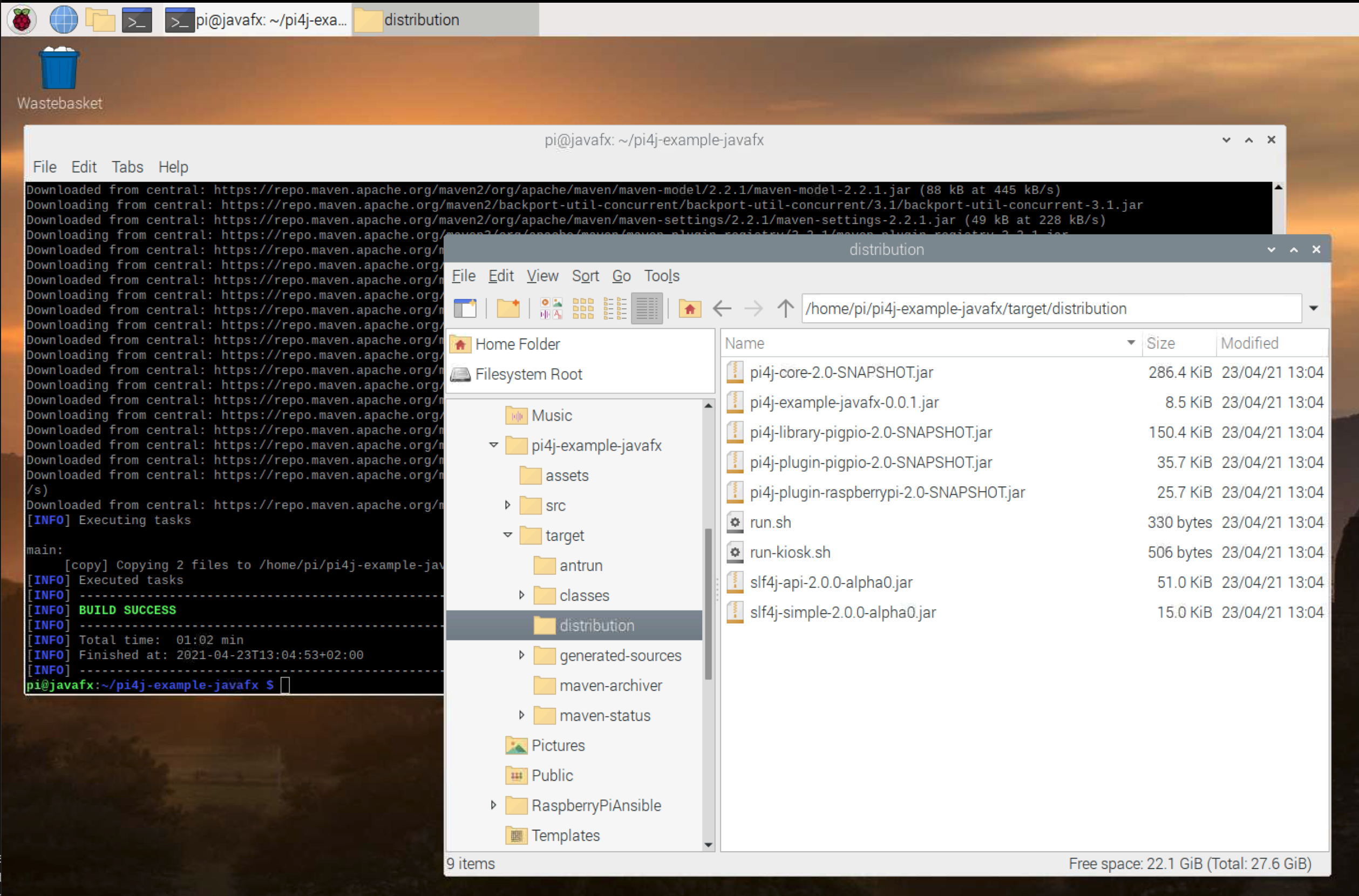 When we want to run our application as a “normal desktop application”, we need to use GTK, which depends on a Window Manager, e.g. X11. That’s what desktop users use as a Window Manager and allows you to have multiple windows, where you can drag a window, open new ones etc.

The example project has a file “run.sh” which contains the full java-command to start the application as a desktop application.

To run the application, use the the provided script run.sh:

As you can see in the video, because we are using an example application from the Pi4J project, we are able to control a LED with the button in the application. 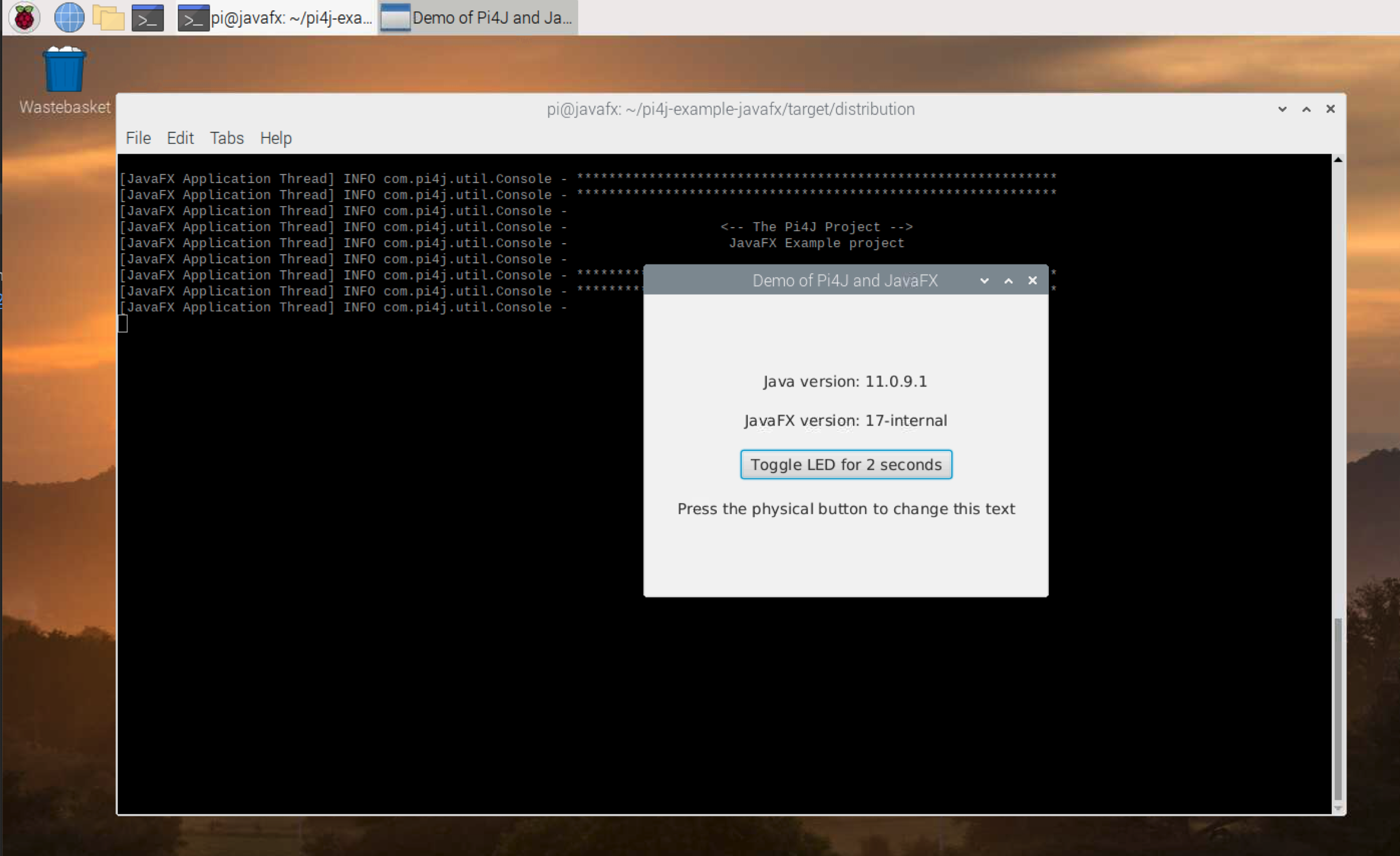 There is also a different approach with “kiosk mode”, where our application is the only thing you see on the screen. This prevents the user to open any other applications, or mess up your system. In this case, there is no need for a window manager, and the application directly uses the underlying (hardware) framebuffer. To achieve this, we use Monocle with EGL and DRM, as that is the Linux approach to directly address the hardware acceleration, without a window manager. The JavaFX application is using Direct Rendering Mode (DRM) to be visualized. An extra benefit is the performance boost, as your program is the only thing that needs to be handled towards the screen.

There is also a file ‘run-kiosk.sh’ provided to start the demo application in kiosk mode, which contains some extra commands.

By using the provided script, we can also start the kiosk approach with the following command. Do this via SSH so you can still interact with the terminal and see the application log in case something goes wrong. Press CONTROL+C to stop the application from the SSH terminal.

If you want to go 64-bit, you can use the same approach. There is no official 64-bit Raspberry Pi OS yet, but you can find more information on “Faster & More Reliable 64-bit OS on Raspberry Pi 4 with USB Boot”.

The matching JavaFX SDK is available at gluonhq.com/download/javafx-17-ea-sdk-linux-aarch64.

Another great addition for a kiosk approach is Unclutter, a small tool which hides your mouse cursor when you do not need it. You only have to move the mouse for the cursor to reappear.

Write once, run everywhere? Yes, even on Raspberry Pi and in kiosk mode! Java and JavaFX rule once more!

Thanks again to the Gluon team for their support while setting up the startup scripts for this post and their ongoing work to support and push the OpenJFX project.