All money is for the main part virtual. Just numbers on bank accounts. Imagine what would happen if Bill Gates went to the bank and asked for all his money in 100$ notes?! A lot of paper would be needed to print those…

But there is also “real virtual” money. Money you can’t get on a sheet of paper. Bitcoin only exists on computers and is actually a mathematical calculation!

Warning: this is dangerous stuff and you can loose money after reading this :-)

In its essence, bitcoin is a crypto-currency implemented entirely with open source specifications and software which relies entirely on a peer-to-peer network for both transaction processing and validation. … _A bitcoin is simply an SHA-256 hash (which is an extremely large number) in hexadecimal format. A persons bitcoins are stored in a special file called a wallet, which also holds each address the user sends and receives bitcoins from as well as password/private key known only to the user, which is required before the bitcoins can be spent._A bitcoin is spent/exchanged by initiating a transfer request from an address in the wallet of the payer to an address of the payee.

How to get it?

Well you can buy it by exchanging dollars, euros, … like any other money, just search for “Bitcoin exchange”.

But what is even a lot better, you can make it yourself!!! Yes indeed, printing your own bank notes brings you directly to prison, but the amount of Bitcoins can only grow if the users themselves create new ones! That process is called “Bitcoin mining” (yes indeed, like gold mining). You will need some really powerful hardware to do that, but luckily specialized stuff exists to do that. You can find some software here, but if you want to get really rich even a good Windows system will not be sufficient, and you better start with investing in something like this: 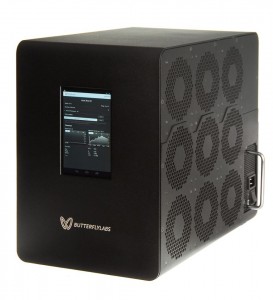 What can you do with it?

Well it’s virtual money, so you will have to spend it in the virtual world…

So you can’t do your daily shopping with it, but you’ll find a long list here where Bitcoins are accepted. And yes there is even a flower shop in that list :-)

The net worth of Bitcoin’s founder

This is a nice page with info about the founder Satoshi Nakamoto and the value of his Bitcoins: coindiligent.com/satoshi-net-worth